Appreciation and distribution of Chinese lacquerware across the Eurasian hemisphere – from Korea to Crimea (3rd century B.C. to the 3rd century A.D)

Indo-Iranian terminology for horses and chariots

Transcontinental cultural contacts of China during the Bronze Age

Transcultural narrative exchanges of Buddhist birth stories in literary and visual cultures between Gandhara and Central Asia: A case study of the Pūrvayoga of Sudaṣṇa (Viśvantara Jātaka)

Susan Whitfield, Sainsbury Institute for the Study of Japanese Arts and Cultures

Animals as Diplomatic Gifts along the Maritime Silk Roads

Following the donkey’s trail: Linguistic and archaeological evidence on the introduction of domestic donkeys to East Asia

This lecture series is part of the research project „Sino-Indo-Iranica rediviva“ at the Institute of Asian and Oriental Studies of the University of Zurich.

The lectures will be held in hybrid mode at 15:00 CET, and are planned to have a max. duration of one hour including discussion. Pre-registration for each lecture is needed to join on Zoom. The registration links are provided on the “Sino-Indo-Iranica rediviva” website.

Like nothing else,  The Golden Peaches from Samarkand  evoke the many exotic items –plants, products, animals, even ideas – that reached China during one of its most interna-tionally entangled and prosperous eras in history. Eminent scholars like Berthold Laufer(1874 – 1934), Paul Pelliot (1878 –1945), Sergej Rudenko (1885 – 1969), Zhang Xinglang 張星烺(1881 – 1951), Haneda Tōru 羽田亨(1882 – 1955) and, indeed, Edward H. Schafer (1913 –1991), on whose shoulders we stand, masterfully wrote about the earliest exchanges be-tween China and regions all across Eurasia, using a wealth of linguistic, historical, and ar-chaeological data.

At the time the Golden Peaches first reached the Chinese imperial court, their carriers hadlong followed well-established trade routes, passing through major cultural hubs like Kash-gar, which had evolved into flourishing oases during centuries past. It was through interme-diaries like the Sogdians that foreign goods as exotic as the Golden Peaches were transpor-ted across one of the driest regions in the world and destined for a place known by the Sas-sanians as “the land behind Chin”. But what about earlier times? How did this long-distancenetwork of economic and cultural exchange come into being? And how did it influence thelives of the people living along its way?

Due to an increase in human mobility in the late second and first millennium BCE, trans-cultural contacts over the vast expanse of Eurasia had long existed before they started toleave their traces in written documents. It is in this period that unmistakeably non-Chineseobjects are found in the tombs of the Shang royalty. What role did such imported commodi-ties like the horse, the chariot, the armour, new bronze technologies or the adoption of newtypes of agricultural and medical products play in bronze-age Chinese society? Who werethe people who brought them?

Throughout the Zhou dynasty, both personal and economic relations with foreign peoplessuch as the Jiang 姜and the Qiang 羌were maintained and, more often than not, skillfullyintegrated into local constructions of pedigree and clansmanship, with the result of becom-ing well-nigh indiscernible in hindsight. One of the reasons for the maintenance and devel-opment of such relationships was surely the access to precious and prestigious goods. Inthis perspective, it comes as no surprise that the state of Qin with its heartland near theHexi 河西-Corridor – the natural gateway to the West – soon overpowered all other conten-ders and became the first unified Chinese state that managed to establish long-distance contacts with contemporary empires. This begs the question, how and by whom these con-tacts were organized?

With the reign of Han emperor Wu 武(157-29 BCE), the empire politically, economically,and culturally expanded towards the Western Regions. According to the official narratives,this “opening” was due, first and foremost, to the Chinese envoy Zhang Qian 張騫(? – 114BCE) and his missions that ultimately paved the way to the consolidation of the trade routesknown as the Silk Roads in European scholarship since the middle of the 19th century. Si-multaneously, products and ideas from Southeast Asia and across the Indian Ocean startedto reach China via maritime routes. How did these new political and economic relationsimpact the life in the border regions? How were the maritime roads administered? Andwhat kind of long-lasting North-South divisions within the Chinese empire did they bringabout?

With the decline of the Han 漢dynasty in the early third century CE and the disintegrationof the empire into smaller, often contesting states, the empire lost its dominion over theWestern Regions and their influence on trade. Nevertheless, trade persisted in the followingcenturies and the oases states remained important economic and cultural centers as reflec-ted, for example, by the presence of many Buddhist sites scattered around the Tarim Basin.As people move, so do their belongings, ideas and beliefs. What kind of commoditiesreached China from antiquity until the fifth century CE, and how did they impact the livesof the elite and commoners? What was given in return? How did Chinese products like silk,paper or lacquer reach Central Asia and beyond? What kind of techniques were transmit-ted, and how did they transform their target cultures?

The language of this interaction is another intriguing question. While early exchange withthe regions in the west was primarily based on personal relationships, it was conducted ona whole new scale since the Han expansion. People from the Chinese heartland settled inthe eastern parts of the Western Regions and traders arrived from afar to deliver their pre-cious goods. How did these people with different linguistic and cultural backgrounds con-verse with each other? With new products being imported, new words were introduced andadopted by locals. Is it possible to witness the development of “creolized” cultures in theborder regions and of a lingua franca or trading pidgins to designate the products? Ques-tions as these are extremely difficult to answer since many different languages and lan-guage families collide with each other, influencing each other’s phonology and morphology,borrowing words or creating more or less hybrid, calquing neologisms. What are the possi-ble methodologies to successfully detect and evaluate Chinese influences in Middle Iranianor Indian languages and vice versa? What are the linguistic features most susceptible tomutual influences? To what extend did such languages and pre-medieval Chinese havedirect lexical contacts? How can we understand phoneme changes in the process of Sino-Iranian and Sino-Indian loanword adaptation?

Beyond doubt, tremendous progress has been made since the days of Laufer, Schafer et al.New techniques and methodologies in all pertinent fields of enquiry related to early Euras-ian contacts have been established, new data have emerged. With this series of lectures,which is part of the project “Sino-Indo-Iranica rediviva”https://www.uzh.ch/…/de/sinologie/forschung/rediviva.html, we invite scholars from across the world and from diverse fields to present their insightsinto some of the questions highlighted above. 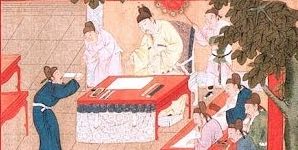