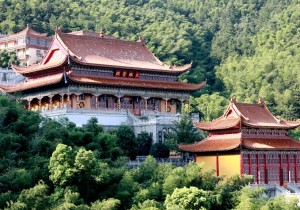 Mount Lu (Lushan) in Jiangxi Province is one of the few ‘Buddhist’ holy mountains about which a monograph is included in the Taishō edition of the Buddhist canon.  A study of this Lushan ji 盧山記 (T.50.2059), compiled by Chen Shunyu 陳舜兪 (?–1074), shows that this mountain has been the peculiar site of consecutive religious ‘conversions’: from a mountain associated with the nature gods of wind and rain, it developed to be a Daoist mountain, and, eventually, a Buddhist mountain. Throughout this whole process, Mount Lu also maintained an important political function. Within the Buddhist religious sphere, Mount Lu developed from being a place of retreat for scholar-monks who were engaged in intellectual debate and practices of austerity, to a place where Pure Land Buddhism developed. Throughout this development, the spiritual contact with India – symbolized in the appearance of the shadow of the Indian king Aśoka on the mountain – was upheld. In this lecture, the history of Mount Lu as a religious, philosophical, and political symbol will be discussed.